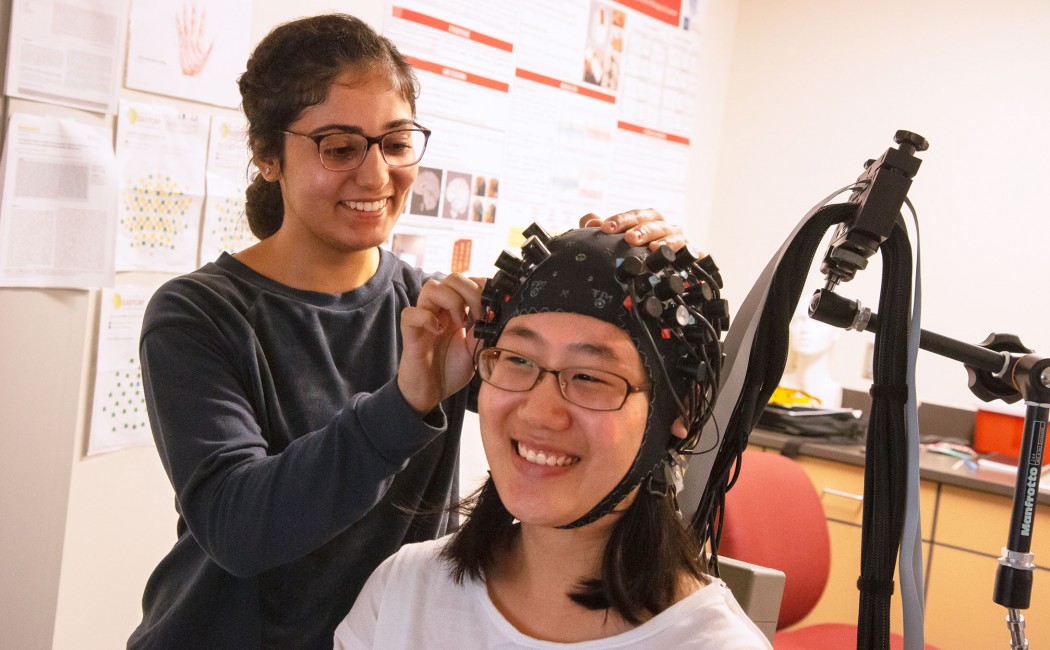 For someone with hearing loss, a successful cochlear implant can change their world.

But because results vary among implant recipients, it is crucial to determine strong candidates for whom an implant will likely be successful.

A cochlear implant (CI) is a complex electronic device that can effectively restore hearing in individuals with severe to profound hearing loss. While the CI does not restore normal hearing and differs from hearing aids, which amplify sounds, it does provide a useful representation of sounds by directly stimulating the auditory nerve. The CI’s success depends on how well the auditory nerve functions.

Yingying Wang, assistant professor of special education and communication disorders, is collaborating with the University of Nebraska Medical Center on a three-year study designed to identify factors to determine the best candidates for successful CI procedures, and to explore relationships between the brain and speech perception outcomes (SPOs) — the process by which language is heard, interpreted and understood.

Central to Wang’s research is learning how brain reorganization occurs before and after cochlear implantation. Brain images will be used to identify pre-surgical neural predictors that may provide a more comprehensive understanding of individual variability in CI outcomes, and therefore generate a more reliably informed prognosis.

Before the surgical procedure, brain activity is measured by functional magnetic resonance imaging (fMRI) and functional near-infrared spectroscopy (fNIRS), and white matter integrity is measured by diffusion weighted imaging (DWI). This can reveal the initial functional areas in the brain responding to speech sounds, and whether the auditory nerve is intact before surgery.

The implantation procedure typically requires a one-day hospital stay to monitor potential complications. Recipients must also return a month after surgery for CI activation, and adjustments to its frequency and range to suit each individual.

“It’s not like getting a pair of eyeglasses,” said Wang, a CYFS research affiliate. “There is a recovery and rehabilitation period for the brain to adapt to the implant.”

Wang is also interested in the brain’s neuroplasticity — its ability to change.

Since 1984, CIs have benefited almost 325,000 individuals worldwide who are deaf or severely hard of hearing. There are approximately 96,000 CI users in the United States.

We want to identify brain factors to better understand and predict potential for future hearing improvements among CI candidates.”

However, such factors only explain only about 20% of the variance.

Wang said that because the CI procedure is invasive and costly, patients need a good understanding of what to expect, rather than simply receiving the CI and hoping for the best.

“Sometimes, patients with high expectations are disappointed with the results,” she said. “Some even want the implant removed.”

Wang’s findings may help doctors form a better prognosis for CI candidates, which will enable the patient to decide whether a CI is beneficial enough for them to proceed, or whether they should consider alternative options.

So far, Wang’s biggest challenge has been finding participants from Nebraska’s small pool of pre-surgical CI candidates. Dr. Johnathan Hatch, an otolaryngologist and assistant professor at UNMC who performs the CI procedure, has worked with area Veterans Affairs hospitals to recruit participants who experienced hearing damage during their military service.

The study is funded by the National Institute on Deafness and Other Communication Disorders and is housed at CYFS and the Center for Brain, Biology and Behavior. Along with Wang, Hatch and Hughes, the research team also includes Hongying (Daisy) Dai, UNMC associate professor, who serves at the project’s statistician.

For more information on how to become a study participant, visit https://www.thewanglab.com/resources/flyers.