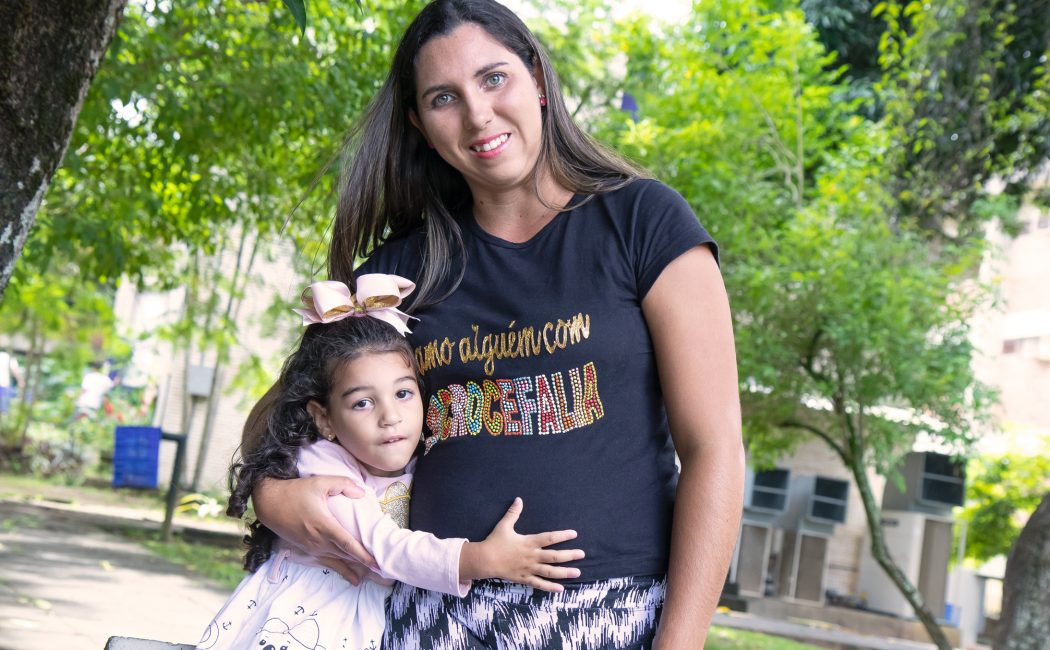 In a brightly lit classroom in northeast Brazil, kindergarteners and their teachers gather for their daily circle time on the carpet. However, today is different. The children are joined by a group of visitors from Nebraska, many of whom don’t speak Portuguese.

One of their classmates, who was born with congenital Zika syndrome, sits near a teacher’s aide for support.

All differences melt away when a familiar song rises from the stereo. Hands clap in unison and cultures collide in one refrain: Baby shark! Doo-doo doo-doo-doo-doo.

Nebraska researchers visited the school in June 2019 as part of a trip to mark the end of the first phase of research to examine the psychological well-being of primary caregivers to infants and toddlers born with Zika syndrome during Brazil’s 2015-16 Zika virus outbreak.

This research is led by Natalie Williams, associate professor in child, youth and family studies at the University of Nebraska–Lincoln, and part of the ongoing Nebraska–Brazil Early Childhood Partnership.

“Emerging research shows that caregivers to young children with CZS have elevated symptoms of anxiety and depression,” Williams said. “When we initiated the project in 2016, very little was known about the psychological experiences of this particular population.”

The results highlight a critical need to focus on the mental health and resiliency of caregivers to Zika-affected children, whose needs will continue to change, Williams said.

Congenital Zika syndrome, spread by mosquitos, is a neurological condition associated with a range of cognitive and physical disabilities, the most obvious being microcephaly.

“Parents raising a child with significant medical and developmental challenges caused by prenatal Zika infection, many of whom are from low-income backgrounds, may have less access to resources and support needed to cope effectively with the stress and uncertainty surrounding their child’s needs,” Williams said.

Mental health difficulties can interfere with an adult’s ability to offer sensitive and responsive parenting and sometimes prevent children from getting the intervention services they need, Williams said.

This has been shown to increase risk for a range of adverse outcomes, including lower social functioning and emotional and behavioral difficulties.

Williams partnered with Pompéia Villachan-Lyra, professor at Brazil’s Federal Rural University of Pernambuco, or UFPRE, on a three-year pilot impact project designed to better identify caregivers and children at risk for poor functioning and developmental outcomes, and to clarify gaps in existing early intervention programs.

Villachan-Lyra led a group of researchers who engaged directly with families in Recife, Pernambuco, a coastal city deeply impacted by the outbreak.

Study participants included 50 caregivers of children ages 0 to 3 infected by Zika who were recruited at IMIP, a local public hospital. An additional 10 caregivers participated in home-based interviews.

“Working with our collaborators in Brazil benefited the work in so many different ways,” Williams said. “Having them on the ground there really shed light on some things that we couldn’t have known regarding families, including their experiences and the challenges they are facing.”

The study revealed that a significant number of caregivers had symptoms of depression that were in the clinical range.

Mild to severe symptoms of depression were identified in 40% of caregivers and were a more prominent concern than symptoms of anxiety. Not surprisingly, fewer family resources and high levels of parenting stress were significantly associated with both anxiety and depression. Caregivers who used more coping strategies had lower depression scores.

“We also discovered that personal distress stemming from feelings of isolation, lack of social support, relationship stress and role restriction contributed to overall parenting stress more than their child’s attributes or the parent-child relationship,” Williams said.

The team also asked parents about their experiences in their child’s intervention program. A key finding was that parents who perceived having more family-centered programming reported lower parenting stress.

However, many parents stated that their child’s intervention program focused on working directly with the child rather than engaging caregivers in supporting their child’s development.

“The pilot impact project data provide a foundation to develop an effective program that can not only improve parents’ well-being and ability to support their child’s long-term health and development, but also support others who interact with medically-fragile children on a regular basis, including teachers and nurses.”

“This has important implications because parenting stress scores were considerably higher for caregivers who were not actively involved in their child’s intervention program,” Williams said. “Caregivers who participated more frequently in their child’s intervention program had lower depression, and it appears that this is because they used coping strategies more often.”

Based on these findings, the team recommends that new and existing intervention programs prioritize caregivers’ mental health concerns, specifically depression and parenting stress, and encourage parents to take an active role in their child’s care and developmental progress.

“Parents may be struggling to adapt and grapple with all that’s required in caring for a child with complex needs, particularly those from lower-income homes who may face additional barriers,” Williams said. “It’s important for practitioners to consider how family coping strategies and resources can promote resilience moving forward.”

As the estimated 3,700 Zika-affected children in Brazil get older, and many enter formal school, the pool of caregivers needing support extends to contexts outside the home.

Williams aims to expand this research to different settings, in Brazil and the U.S., including schools, hospitals and clinics.

Williams, Hollist and Hatton-Bowers have initiated collaboration with the University of São Paulo nursing faculty related to using mindfulness to improve the well-being of parents whose children are born prematurely and in intensive care hospital settings.

“In the future, I see this research moving from descriptive findings into intervention,” Williams said. “The pilot impact project data provide a foundation to develop an effective program that can not only improve parents’ well-being and ability to support their child’s long-term health and development, but also support others who interact with medically-fragile children on a regular basis, including teachers and nurses.”

Natalie Williams is a CYFS research affiliate whose research is part of the Nebraska-Brazil Early Childhood Partnership, jointly funded by the University of Nebraska–Lincoln and the Maria Cecilia Souto Vidigal Foundation. Launched May 2016 in São Paulo, Brazil, the partnership aims to foster international collaboration around priority areas in early childhood that are important in both countries. Learn more at cyfs.unl.edu/brazil.