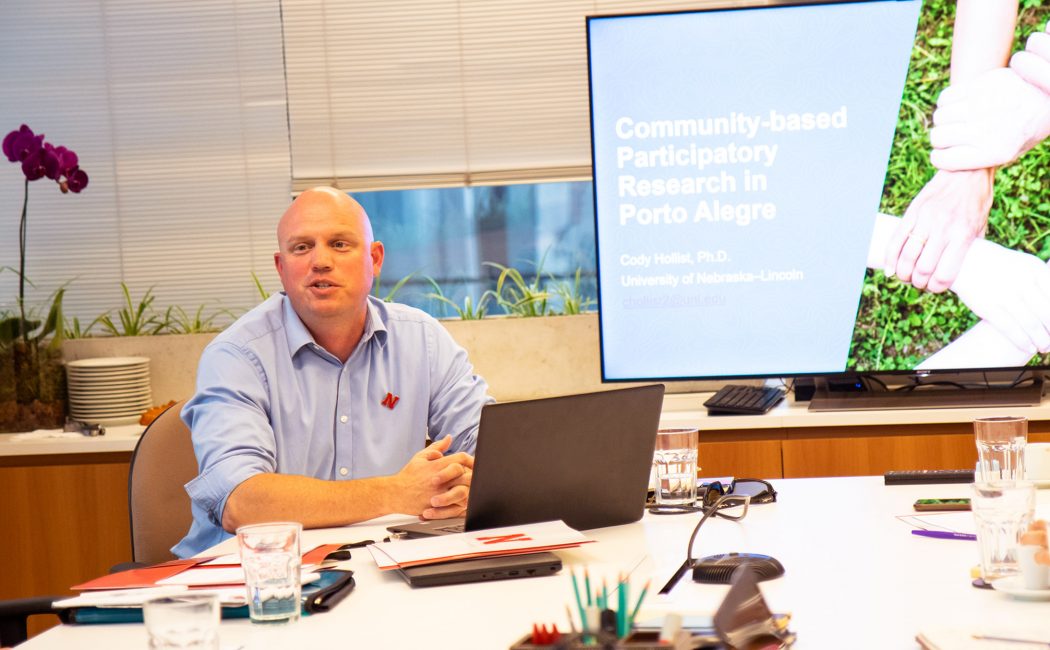 Efforts to help vulnerable communities is most effective when it actively engages community members, agencies and other stakeholders in solving complex social problems.

In many parts of Brazil, communities must find their own ways to address the needs of children and families with limited resources. Those needs have intensified since early 2020, as COVID-19 quickly spread throughout the country.

Cody Hollist, associate professor of child, youth and family studies, is working to improve educational outcomes for children and youth living in Cachoeirinha, a high-risk, low-resource suburb of Porto Alegre, Brazil. He is collaborating with Bruna Seibel, postdoctoral researcher of Pontifícia Universidade Católica do Rio Grande do Sul (PUCRS) and the project’s principal investigator.

Using a community-based participatory research (CBPR) approach, Hollist and Paul Springer, associate dean for student success and professor of child, youth and family studies, are leveraging their experience in working with community agencies — churches, medical clinics, police and schools — to improve outcomes for youth and families in vulnerable communities.

Researchers are working to identify the needs of relationships among families and community agencies, and their collective abilities and resources to address those needs — particularly, the mental health and self-efficacy of adolescents, and factors within families that affect the adolescents’ growth and development.

The team aims to better understand the relationship between community risk factors and family social support to inform interventions. The CBPR approach enables the community to drive sustainable interventions that use resources effectively.

Before the pandemic, Hollist said, Cachoeirinha adolescents were more positive about the future.

“They reported having good friends and family they could rely on,” he said. “They had a good sense of community, which was a powerful protective factor for them. They generally had hope for the future.”

But after more than a year of the pandemic, data indicate their optimism has faded.

“Family solidarity, social support and relationships, self-efficacy and hope for the future are characteristics have been hugely impacted by the pandemic,” Hollist said. “Some have improved, but many have suffered. If a 15-year-old has no hope for future, their investment in education, avoiding drugs and staying out of trouble declines.”

Brazil was hit hard by the pandemic, particularly in low-income areas such as Cachoeirinha. For example, one recent study showed about 80 percent of the COVID-19 deaths in São Paulo were of low-income residents.

The lack of resources and available health care became even more critical during the pandemic, exacerbated by low vaccination rates and widespread, aggressive viral variants.

Suicidality has risen dramatically, as have rates of cutting, burning and other self-harm — especially in poor communities.

Seibel said she is concerned about even greater potential problems emerging in the poor communities.

“In this neighborhood, we have a high rate of drug trafficking, with adolescents becoming involved as early as age 11 or 12,” she said. “I’m concerned there will be an increase in drug trafficking, as well as school dropout rates. Schools here have been closed for more than a year, and it will be difficult for students to return to school.”

Researchers also have faced obstacles. Since early 2020, the team has conducted research by phone and through local health clinics rather than collaborating in-person.

It was the study’s CBPR model of community engagement that sustained the project, Hollist said.

“If we had not approached this study from the beginning in a CBPR mechanism, the pandemic would have ended it,” he said. “The ability to have an on-the-ground presence embedded in the community is what saved the project.”

Hollist has longtime ties to Brazil. When he was 19, he spent two years in the country working as a missionary. In 2003, he established a research partnership in southern Brazil focused on mental health. He was integral in the 2016 formation of the Nebraska-Brazil Early Childhood Partnership, which has led to three pilot impact projects conducted jointly in the United States and Brazil.

Hollist said the resilience he sees in vulnerable communities such as Cachoeirinha is inspiring.

“I’ve seen things in those communities that would beat down and destroy many of us, but they smile, they hug and they grow,” he said. “I have learned a level of resilience that helps inform how I teach, and how I work with clients when I provide therapy.”