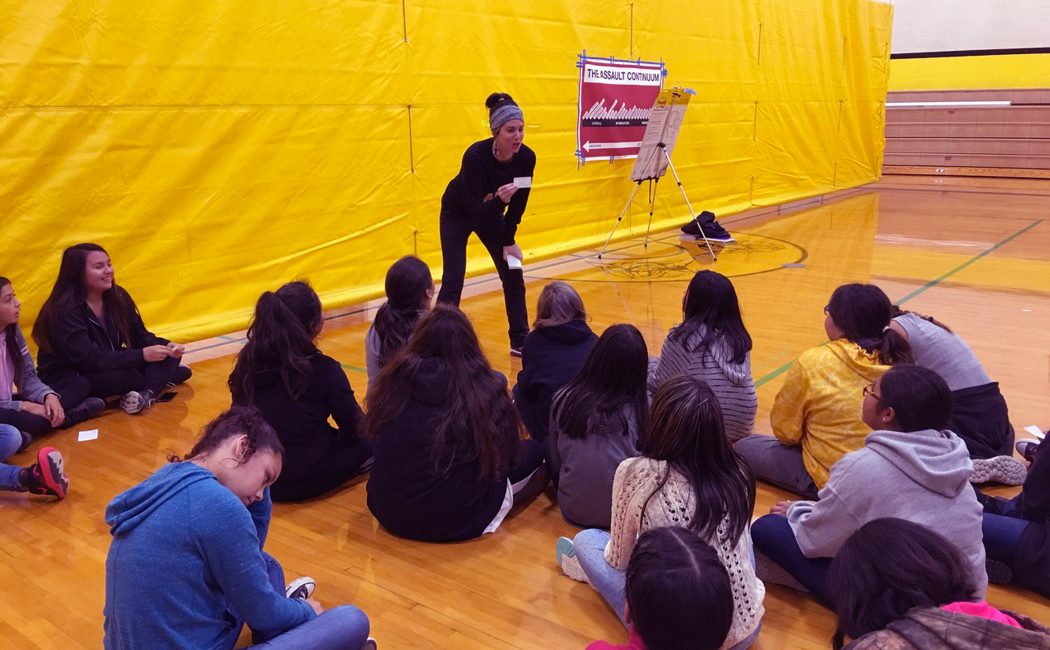 Edwards, associate professor, CYFS and educational psychology, collaborated with other researchers and community partners to evaluate IMpower, a self-defense empowerment program delivered to Native American girls in classroom settings. The 12-hour course included 74 participants from one middle school and two high schools on a reservation in South Dakota.

Edwards said adolescent girls who participated in the program experienced 70% fewer instances of sexual harassment after completing the course. Participating girls also felt more confident to resist an attacker, she said, and reported having more knowledge about self-defense compared to girls who did not receive program.

“The vast majority of sexual assault prevention programs do not tend to move the needle on reducing rates of sexual assault,” Edwards said. “What was unique about this program is that it doesn’t just teach skills, but empowers girls to use the skills they are taught.”

For example, Edwards noted one girl who completed the program who said she learned she “was worth defending” — the core of the IMpower program.

Developed in 2009 by Lee Paiva, founder of No Means No Worldwide and IMpower United, IMpower teaches youth how to recognize risk, say “no,” use physical skills to resist a potential attack and tell others if they are being hurt. The course is taught in areas of the world where women and children are at extreme risk of sexual assault.

For participating children ages 9 and younger, the IMpower classes were mixed. But for the adolescents, classes were split between boys and girls. Trans and gender-diverse individuals were allowed to pick which class they wished to attend.

What was unique about this program is that it doesn’t just teach skills, but empowers girls to use the skills they are taught.”

While the girls’ classes primarily emphasized recognition of risk and how to resist sexual assault, the boys’ training focused on consent, bystander intervention and challenging rape myths that have normalized sexual violence and harassment.

“It gives boys a good forum to talk about things they might not talk about anywhere else,” Paiva said.

Native American youth experience high rates of sexual abuse — a problem rooted in historical trauma, colonization, forced placement in boarding schools and other atrocities perpetrated by the federal government. The project addressed the lack of research that assessed the impact of child sexual abuse/sexual assault prevention programs aimed at protecting this vulnerable yet highly resilient population.

“When you deal with populations with high disparities of mental health, substance misuse and poverty,  you find individuals with lower self-esteem,” said Leon Leader Charge, tribal training technical assistance specialist and research associate for the project. “We want to build capacity and help the community find resources that will help.”

The recent findings follow research led by Edwards while she was at the University of New Hampshire during the 2018-19 academic year. Her initial evaluation of IMpower — the first assessment of a child sexual abuse prevention program among Native American children — was published in November 2020.